Muse S is a multi-sensor meditation device that provides real-time feedback about your brain activity, heartbeat, breathing and movement. The device integrates with Naxon Explorer. Enas Aljohani and Muhannad Saber worked with the native Muse S functions and tested it with Naxon Explorer. The design of Muse S enables other scenarios of use compared to Muse I and Muse II, fitting better for sleep and sports management.

By Enas Aljohani and Muhannad Saber

Naxon Labs' main focus is the EEG technology and the possible uses of it. Naxon Labs has developed a custom software and interface which uses artificial intelligence to identify patterns and process the data recorded by such devices in products like Naxon Explorer and Naxon Emotions.

To achieve this goal Naxon Labs uses BCI (Brain-Computer interface) which is a direct communication pathway between an enhanced or wired brain and an external device, which in this case is portable, wearable EEG device by the name of MUSE, the line of products of Interaxon Inc from Canada. The data obtained can be used in many fields and have many applications such neurofeedback, advertisement, product development, medical field, research, self-improvement and control of other devices such as TVs or drones.

Naxon Labs uses the MUSE device to obtain the data. MUSE is an EEG device which is available to consumers to purchase and use to record their own brain waves in different settings like sleep, concentration periods, different emotions and many more. The device is light, portable, easy to set up and has different models and generations. The impressive results mitigate the fact of being portable, that could have the limitations of using less electrodes than the conventional EEG devices, or being more prone to interferences.

Naxon Labs’ main product is a platform called Explorer. Naxon Explorer is a platform integrated with machine learning tools and automatic pattern analysis like Naxon Emotions, and the results can be used in research in many fields and can have many applications. The data recorded in the sessions can be downloaded to be processed in other tools for different analysis including training for machine learning in specific use cases.

Muse S is a multi-sensor meditation device that provides real-time feedback on your brain activity, heartbeat, breathing and movement. The device integrates perfectly with Naxon Explorer. 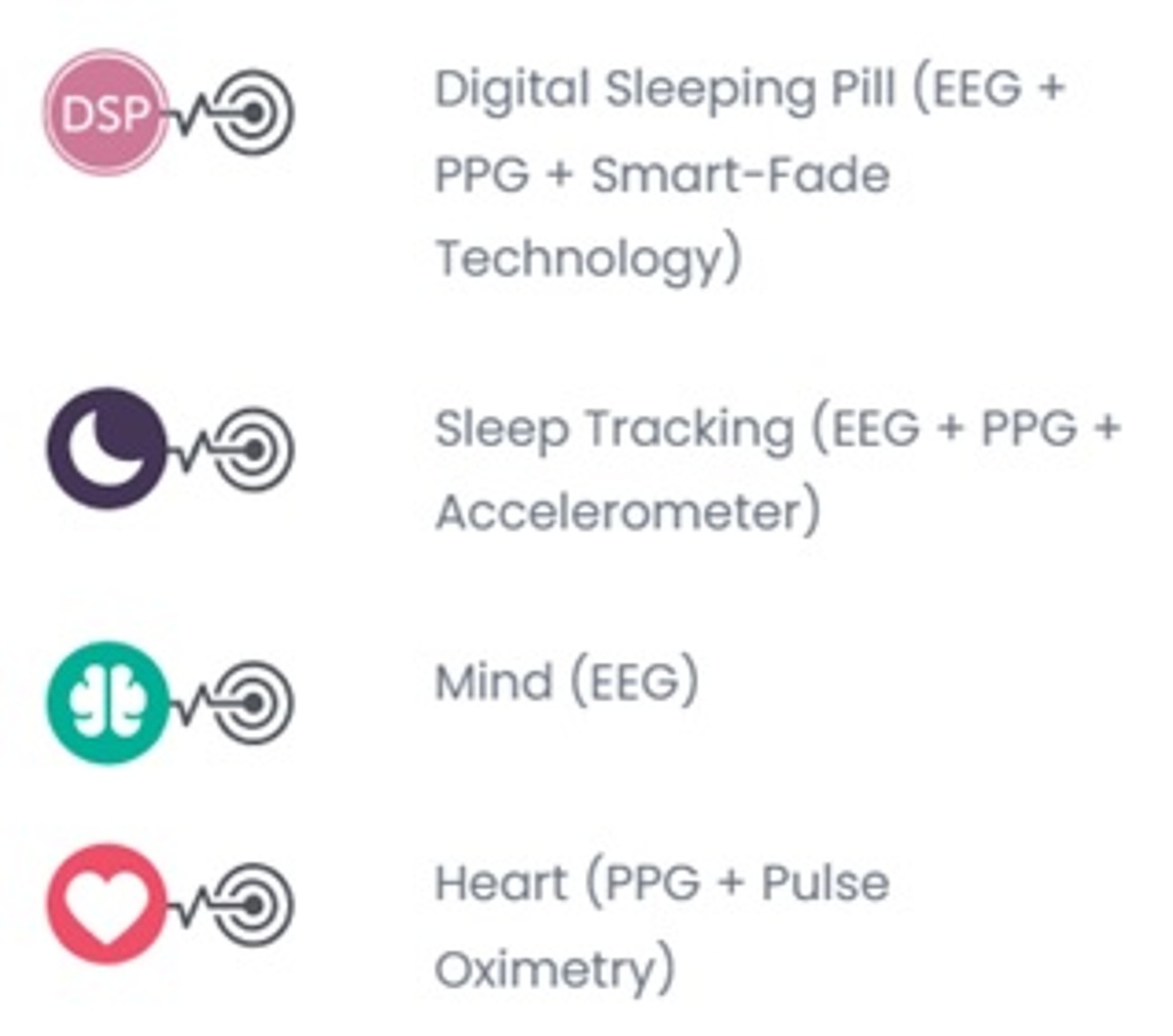 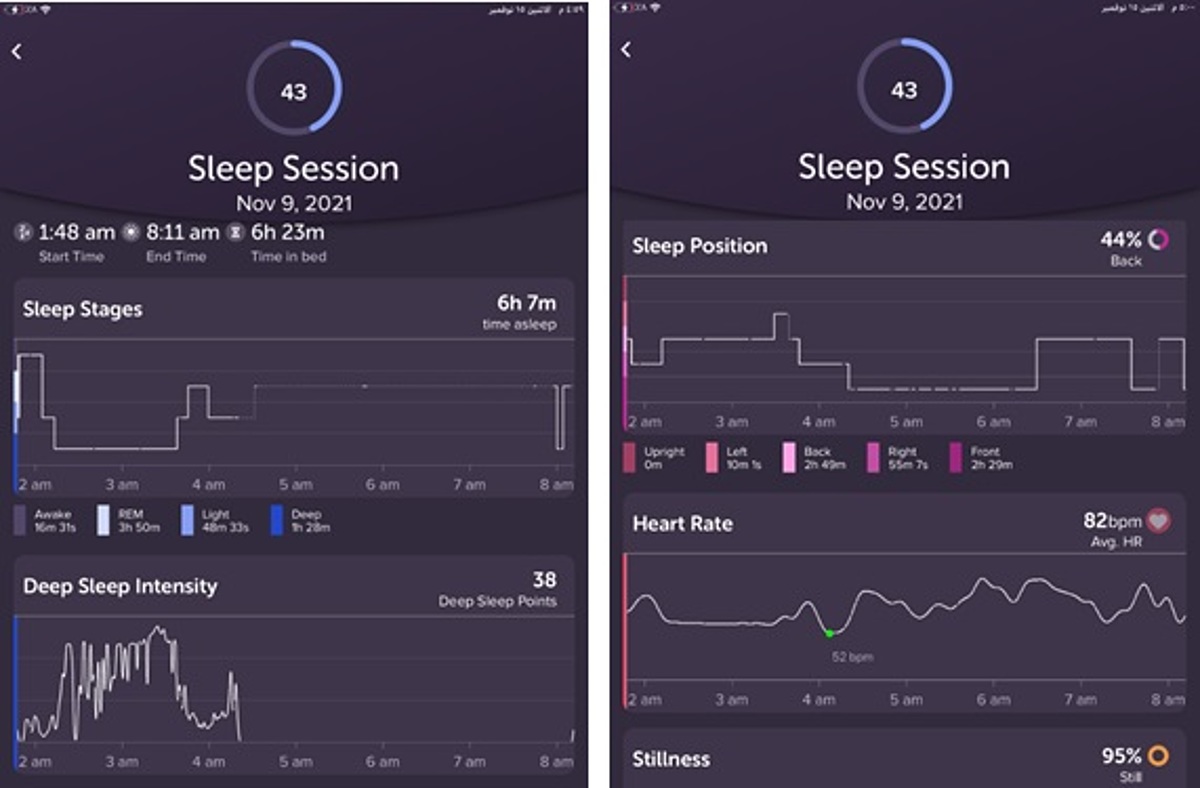 In the first session, it was a case where we did not check the MUSE S battery before start recording. Accordingly, the device was able to record only 2h30min of a 6h23min of sleep cycle. However, it was a long day and having insomnia it explains the short time spent in deep sleeping and frequent position changing.

In the second session, we managed to fully charge the battery, thus the device recorded the full 5h46min sleep session. However, although the analysis showed lower heart rate and longer deep sleep stage, it showed also, decreased stillness and increased intermitting awaking time.

Recordings with Muse-S and Naxon Explorer 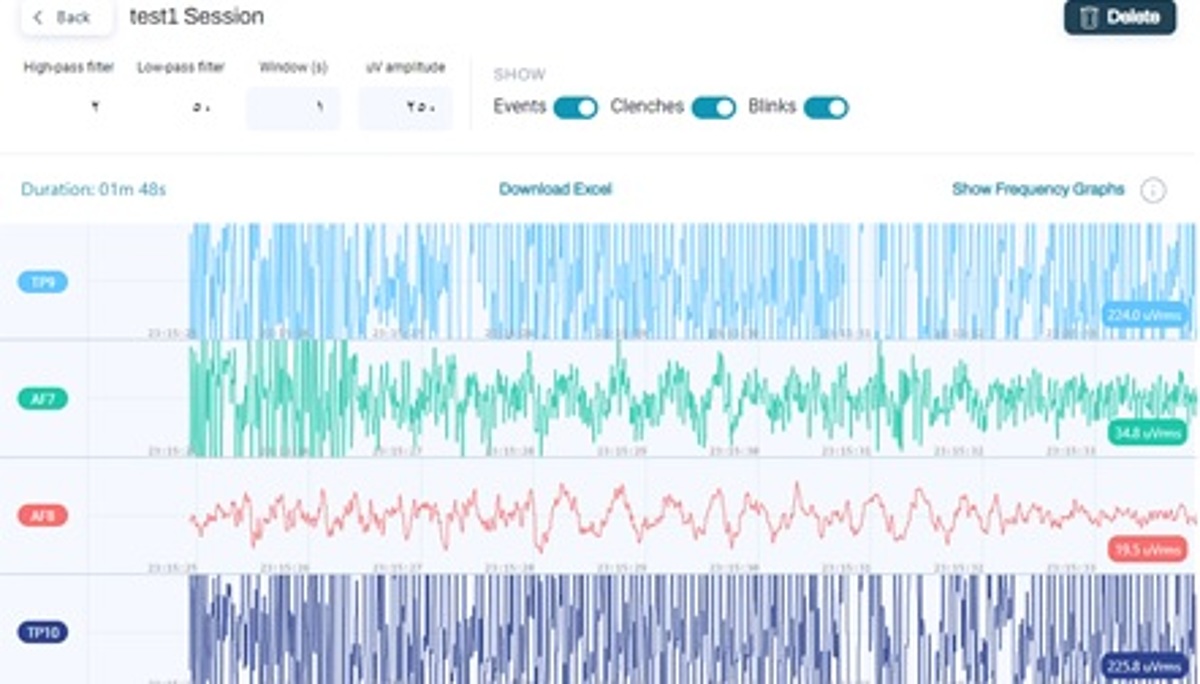 In the first interactions with Naxon Explorer, you can see the brain waves pattern, and you can realize if you are not adjusting the sensors properly in the head band. The MUSE S device has four electrodes. Two to be placed on the forehead and two behind the ears. In this first session, the ears electrodes (TP9+TP10) signals were chaotic due to the artifact position and its electrodes. To avoid this, it is better to adjust the electrodes before start the recording. Also, you may have to band your hair and wipe the electrodes to get the best waves quality.

In the second session we adjusted correctly the electrodes. In this case it was practiced meditation for approximately 1.5min. In this record you are able to see the low frequency waves which appears with stillness and calmness.

For an advanced use of Naxon Explorer and EEG techniques in sleep, you can refer to the blog post "The use of portable EEG technology in sleep disorders". Leandro Castelluccio, CEO of Naxon Labs, explains that "one of the areas of gradual development of Naxon Labs refers to applications that evaluate the quality of sleep and can be used personally and individually by users of portable EEG devices and professionals in the areas of Clinical Psychology and Sleep Medicine. The advantages of applying this technology to this area are multiple, for example, remote monitoring and better patient follow up. At Naxon Labs, through the development of our integrated software platform with pattern analysis tools, we seek one of the applications to be the staging of sleep and the completion of preliminary analysis of the person's sleep quality". In the article Castelluccio shows the current problems in the area and how this new technology is introduced to it, and talks about Sleep disorders in today's world, Polysomniography, Portable EEG applications and Sleep Staging and portable EEG: new data processing techniques.

Enas and Muhannad joined Naxon Labs as part of the Virtual Internships program in Saudi Arabia. This program aims to be the leading provider of virtual internship programs, partnering with universities and other academic institutions around the globe and are committed to fostering a community of global career-ready graduates with tangible skill sets and international competencies. Raksha Kini is the Head of Company Account Management of Virtual Internships, and remarked the vision and mission of "aiming to bridge the gap between university and the workplace, reducing barriers and widen participation, at the time help to prepare students and graduates for the future of work”. Raksha believes in the democratization of the global workforce through talent pipelines and access to jobs worldwide.

About MiSK and Virtual Internships

On the 25th of April,2016, the Saudi crown prince Mohammed Bin Salman (and the founder of MiSK) announced the 2030 Saudi vision, which is a strategic framework to reduce Saudi Arabia's dependence on oil, diversify its economy, and develop public service sectors such as health, education, infrastructure, recreation, and tourism. Since then, my life as a Saudi woman where never the same.

As women empowerment contributed an important aspect of the National transformation project, the opportunities for a female to actively participate in the public life expanded markedly. Saudi women finally had the freedom to drive her car, travel alone and achieve her goals and help her community.

Virtual internships -est.2018- is a program provided by MiSK, which is a non-profit foundation aimed to empower the youths and help them to get the needed support, guidance and training to start their career while embracing their values and culture and of course, their country. 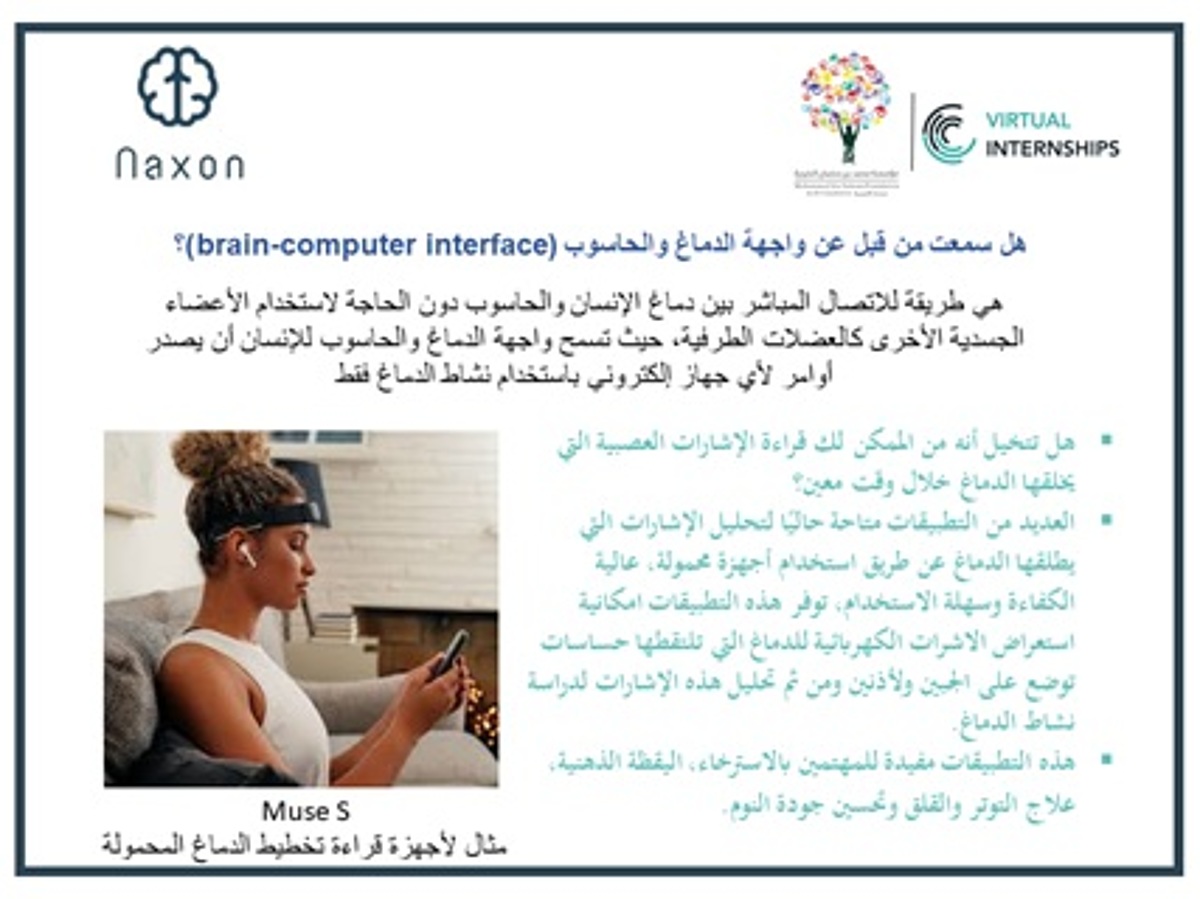 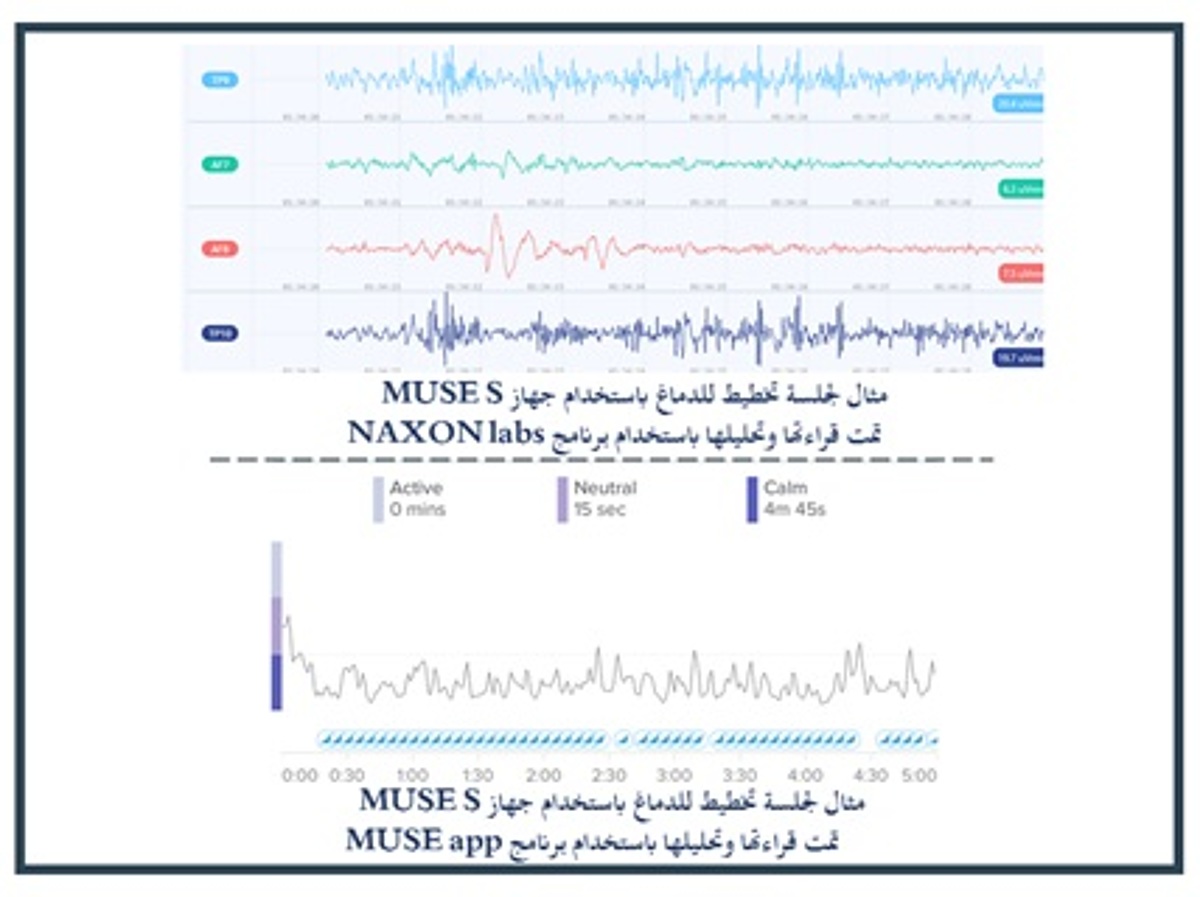 Enas participated in many research activities including data collection in “prevalence of depression, anxiety, and stress among Infertile women in Madinah; Maternity and Children Hospital and associated risk factors, Saudi Arabia: A case control study”, 2019; data collection in "knowledge and awareness of Tourette's syndrome among the general population in Saudi Arabia", 2020.
As Clinical Experience Enas joined the Summer Training in Addiction and Psychiatric Hospital, Medina, 2018.